Made a good cup of coffee, had avocado for breakfast – checked! 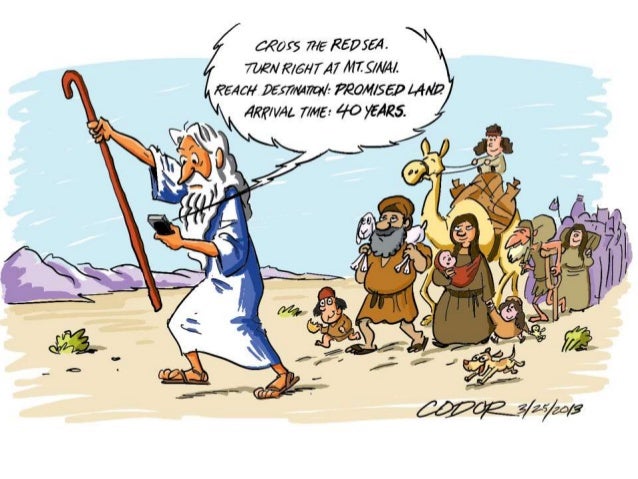 What if there were such thing called GPS back at Moses time? Would he still be faithfully following God’s plan (through the GPS, along with its predicted arrival time)?

Thankfully, there were no such thing back then so that Moses could set himself as an example of a humble servant who were being faithful to his Lord. He didn’t know what would it be across the sea. Man without vision, I must say, but faithfully carrying his mission, which sounds just too impossible for us who live in this modern society.

A conversation with a very good friend of mine, who is now facing a more-or-less the same situation as I am, inspired me to write this reflection. If I have to describe it, I would say it’s like we had been hiking on a mountain (not an easy one for sure) with a great expectation to enjoy the most beautiful view from the top, but only to find out that there’s an even greater mountain to hike.  We didn’t see it when we started our journey. Little did we know that there’s even another mountain! Energy’s drained. Expectation’s failed. And we are about yelling to the sky, “Really, GOD? Now WHAT?”

When I was a kid, I always dreamed of living in a foreign country. I wanted to see the world. I worked my ass off to learn English as I believed it was my first and foremost window to the world, just as my parents told me so. I still can remember how I cried when I knew one of my good friend (and greatest competitor at school) were moving to Singapore for her middle school. I kept asking why it was not me having that chance of going abroad. I even asked to my parents, “why couldn’t we move abroad too?”. As a kid, I knew that we were not a wealthy family and my parents had done whatever necessary to give their kids the best possible lives they could. They sent us to good schools, they paid for those expensive English and piano lessons for years (and Mandarin later on!). Despite of my laziness and wish to have more playing or TV time as a kid, I tried my best not to let my parents down as I knew how much they had sacrifice themselves too for their children. But still, that was my first disappointment of my childhood dream.

As I grew up, I looked at that dream in many different perspectives. I had come to a conclusion that there was no way of me going abroad for education with my parent’s out-of-pocket money. It was just too expensive and unless I got a scholarship, I didn’t want to be a crying baby asking my parents about it. I still can remember that my Dad told me that he was disappointed too for not being able to send me abroad as he had always been dreaming of. But as an exchange, they supported me to go to the best schools nationally regardless of the tuition fee. They supported my craziest dream to be a professional musician back then. We attended many auditions until I decided that it might not be the path I wanted for my future. I also remembered when my Dad and I attended the information session for ITB Business School in Bandung and when he brought home leaflets from Prasetya Mulya Business School. None of them were cheap comparing to other programs available at that time. But I guess, that was how my parents showed their sincere intention to give the best possible education they could.

Then, by whatever miracle, I got accepted in Universitas Indonesia, one of the top notch public university in our country, with little to no prior preparation during my high school years.  That was the point of me shaping my own definitive dream as a young adult in the field of dentistry. There were ups and downs along the way but it made me happy when my parents told me how they were so proud of telling their friends that their daughter was going to UI. To be honest, I was disappointed with myself for not graduating as a cum laude for my bachelor and DDS degree because I know that it would make my parents even prouder. But I promised myself that I would be the best practitioner possible as an exchange. My early years of career life were not the smoothest one. There were those dark times when my wheel of live turned upside down (in 2011 and I don’t want to talk details about it here). And again, there were my parents by my side, being my greatest supporter to rise again. I can still remember when my dad drove me to International SOS for my job interview. I do remember too how he was being supportive to let me work outside Jakarta (to a remote place that I even had not heard before back then). I know that my parents were absolutely worried back then to let their beloved daughter leaving her comfort nest for months of working in a mining site which were not even included in a normal Indonesian map. But my dad was an adventurer when he was young and he always believed that this experience would lead me to a better future. I must say that the better future didn’t follow right away. But after the trip (and many other trips afterwards), I came back stronger and more confident with myself. That period of time taught me a lot to be a skillful dentist, a good communicator to patients and colleagues, and to work in an internationally standardized healthcare facility (including all of those “complicated” referral system that I was not properly taught at school).

When I was in dental school, I always wanted to be specialized in orthodontics. That particular dream came true when I got accepted in the program in 2012. Again, despite of expensive tuition fee, my parents were there to support me. I felt like I was given another chance to make them proud of me, through my work, through my achievements. I have to say that this was actually the time that I felt like I had come to a right path (I didn’t feel quite the same on my first years in dental school). I felt exactly the same passion as I had years ago in piano, but in a more mature mindset. I’ve been working hard literally day and night, I slept only for few hours after my “supposed-to-be-part-time” job and wake up the next day for morning classes. Drained? Tired? Of course. Mentally as well as physically. But that point, I kept telling myself that these all would be paid off right after that graduation time. And it was.

I’m proud to say that I got the highest GPA in class. I was even prouder when I knew how proud my parents were, and when my dad told me after the graduation ceremony, that he was telling the other parents sitting next to him in the ceremony, “Look, that was my daughter!” when I walked to the stage, representing my friends from the graduate dental programs at that time, receiving the diploma and cum laude certificate of acknowledgement from the rector of UI. On that stage, I was whispering to myself, “this is for you, Papi & Mami!”. My lovely sister (who was my greatest helper during the making of my final comprehensive examination book) took picture of the other oath taking event and posted on her Path account, with the hashtag #bestgraduate and #proudlilsis. My boyfriend (at that time), attended my graduation and told his whole family about my achievement. I must say that this was my greatest achievement in life EVER, to make my loved ones proud of me.

Being able to work in OrthoSmile Dental Care was also the best period in my career life. I got a rare chance work with like-minded professionals, and the best of everything, this was the working environment (other than Int’l SOS) that I felt treated as a colleague, not as a junior. During those years, I could hear myself telling me “almost there, baby! almost there..”. Yes, I believe I was almost there in reaching my dream as one of the best orthodontist in Jakarta (thanks to my boss, my mentor, my “big brother” – Doc Benny Soegiharto for that).

When your office becomes your home, and your colleagues become your family.

(In loving memory of: drg. Olivia Pribadi, Sp.Ort – my “cici”, my other ortho-role model, my humble and generous colleague, my kind-hearted orthodontist)

Until I made the hardest decision in my life. To leave everything behind, to join this man that I have vowed to honor and cherish for the rest of my life, here in the United States of America. And of course, that decision led me to this (another) point of uncertainty and had (another) session of endless discussion about it with my mate who is now facing the same situation on the other side of the world. From the feeling of jealousy to what our peers have achieved (to this particular issue, yes, social media sucks) to questioning our fate and what we could do about it. We might not have the answer yet. But as I’m reaching the end of my reflection today, I’m coming up with a conclusion that we both are here for another phase of personal growth. Davis (jokingly) told me many times that a “glass half empty” kind of person is more prone to depression, and yes, he was referring to me. And yes, I denied it whenever he said that bitter truth. But I know that I’ve got to accept it and learn to be a “glass half full” kind of person instead.

After all, my decision led me to my childhood innocent obsession, to live abroad. These past few months have showed me many other things that I could have never imagined before. I’m gaining new skills of cooking and doing some house chores.  I’ve got a kind and amazing husband who is always there to help me out with things despite of his tiredness due to his abnormal working hour. I’ve seen some exciting places here and made some new exciting friends. I (am still learning to) drive on the right hand side of the road now. I’m still having families and friends who love me from a far. And most of all, I’ve got the chance to learn that personal achievements are not always as seen in social media. I’m learning to humble myself and accept that life is a constant change.

In the end, when I look back, I have had an amazing 31 years of life. So, on this day, rather than feeling helpless seeing another mountain, I decided to rest for a while, sit and enjoy the view of my beautiful journey up to this point and treasure every single helper that God has sent me along the way.

As cliche as it may sound, promised land might be not a destination after all. It might actually be every “land” we’ve been with our loved ones along our personal journey as a human being in this earthly body.

Personal random writings of mine